Google is trying HARD to save Orkut !

Once Orkut was the best social networking sites, mainly in India and Brazil, but things are changing now. This article will tell you about Orkut Monetization.

However Orkut isn’t a prominent social networking site in U.S. and Europe but when the stats are compared worldwide, Orkut seems to be a frontrunner in its arena.

Orkut majorly dominates Brazilian and Indian market. In India, there are local competitors like Bigadda and ibibo which are also fueling big bucks into their systems but Orkut is unarguably the winner of young Indian hearts.

But this Google’s service is still struggling for the monetary returns it was looking for.The ROI of Orkut is below expectations and there are rumors that Google may eventually shut down Orkut (like Yahoo’s recent shutdown of their social networking service ‘Mash‘) or rather sell it out to a local business player (Indian or Brazilian).There are a number of factors which lead a social network to a poor ROI and consequent shutdown that we have already covered here

Advertisements,being the only method of earning for them through the massive page view counts (in billions) they generate has been smartly crafted and implemented by Orkut.They are attempting ad monetization very carefully(just too carefully),taking into consideration a user’s tolerance for intrusion into his personal space.

The two places where they prominently monetize are communities and user profiles (to a lesser extent).

Doing minimum intrusion,they advertise at the ‘lowest worth real estate'(right bottom) of a user’s profile and also at an infrequent rate. They advertise their own services such as Youtube and Google Maps usually in case of lack of relevant ad inventory. 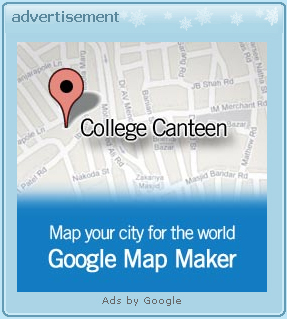 The most recent experiment that they have tried out is somewhat similar to ‘news feeds like‘ ads which they also exercise in Gmail.This is,infact proving effective and not intrusive.Take a look

This is the ad format used in Gmail It appears more of a Newsfeed (they have even named the section as ‘related news’) rather than an advertisement and also looks unintrusive.

Update : Orkut has recently reverted back to one of its actions that was bugging Orkut users since its implementation : ‘Link suppression’. Here’s the full post.