Facebook Timeline: Something that Google+ Can’t Do Much About

The Facebook Timeline feature has been explained in details here along with comparison with Google Plus.

During the F8 conference this week, Facebook unveiled a plethora of features that will soon be integrated within Facebook but the ‘star feature’ of the event was undoubtedly the ‘Facebook Timeline’.

Currently limited to Facebook developers only, ‘Facebook Timeline’ will soon be the new ‘user profile’ of all Facebook users and will portrait the entire lifespa user in the world of Facebook in reverse chronological format. 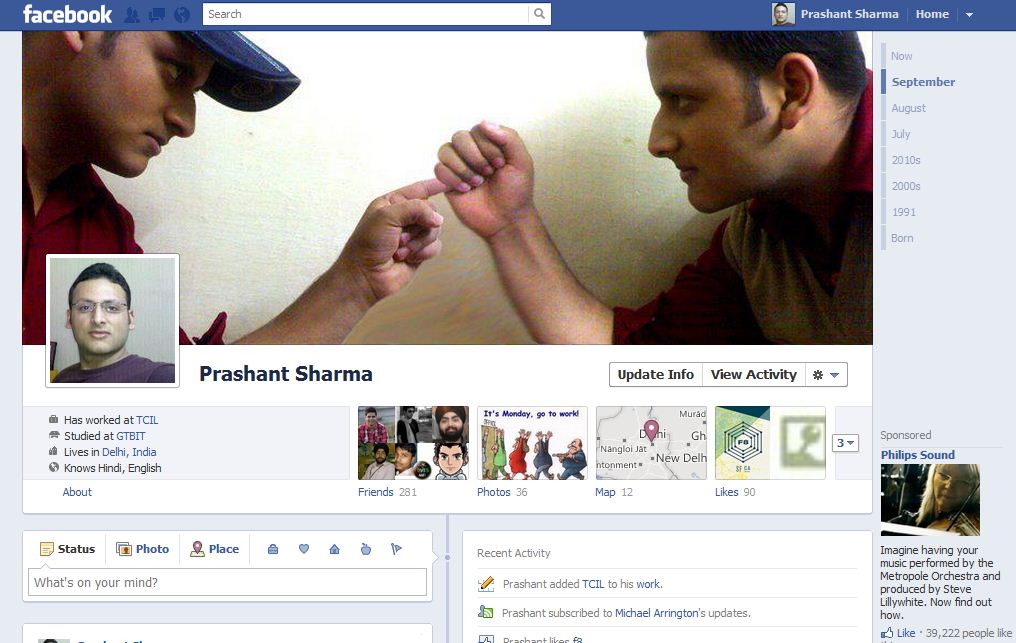 After experiencing ‘Facebook Timeline’ myself, I can confidently say that Facebook has done a fabulous job with ‘Timeline’ feature and has given one more reason(a stronger one this time) for all its existing users to stick to Facebook and not jump the ship (Google plus?), no matter what.

Google is desperate to get into ‘Social’ game with ‘Google Plus‘ and the early response has been good, if not overwhelming. This week only, Google released an array of features and enhancements to Google+ and also opened it for everyone to join. Although Google has added more and more features to Google Plus ever since the Social network came into existence(it’s still very young by the way), Facebook has proven to be one step ahead of what Google has done so far.

More specifically, Google Plus looks better when seen from a technical perspective(sophisticated features etc) while Facebook seems to be doing a better job from ‘social’ perspective. ‘Facebook Timeline’ is an apt example of Facebook’s ability to hit the right ‘social’ chord and keep users, more and more addicted to it.

Another important thing to note here is that Google and Facebook have been adding competing features, one after another and Google may eventually deliver most of the features that Facebook announced this week but the case of ‘Timeline’ is different.

It’s no big deal for Google to pull out better profile UI and make a ‘star profile’ out of its users for history lookup, even better than ‘Facebook Timeline’ but ‘Timeline’ feature scores a home run, mainly because of rich amount of data and information history, available exclusively at Facebook.

‘Timeline’ is a beautiful and effortless way to go back in time and see the stuff you shared, the videos you liked, the comments you posted, the pics you posted, almost everything you did on Facebook. That “user history” is only exclusive to Facebook while Google Plus, even though stuffed with glossy features, has comparatively zero history of its tiny user base.

Even if Google brings user ‘Timeline’ to Google Plus, the lack of user history will never produce the impact that Facebook Timeline’ is bound to create.

This ongoing battle of Google Plus vs Facebook is heating up fast and we’re going to have plenty of innovations in social space in the time of come. Competition breeds innovation!