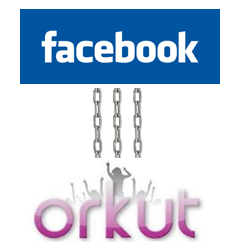 Facebook and Orkut are both best when it comes to social networking. This article is about Facebook Orkut profile linking. Find the complete details below.

If there was any left-out hope of Orkut, rising from the ashes and capitalizing on the strong user base and loyalty, it once created in India and Brazil, those hopes have just been brutally murdered, by none other than….Facebook.

There’s no denying that Facebook has already beaten its competitors so badly that chances of other networks like Myspace, Orkut or Friendster to flourish back to glory are next to nothing. But it is terrible to see Orkut, a Google backed social network, literally giving up the whole game of Social networking, when they’re actually onto building a social layer(on top of all their services) and want to compete with Facebook, head on.

The Rise & Demise of Orkut

I started my social networking foray with Orkut and once had all my friends hooked to Orkut. And now, it’s all Facebook everywhere and even after having 250+ friends on Orkut, it’s a long, haunting silence i hear, nothing else.

While Orkut was declining but still having majority on its side in India and Brazil, it bluntly copied every single feature that Facebook launched months back(social games, apps), in a lame manner, of course. Orkut tried to innovate couple of things on its own(‘Promote’ feature) as well but they were so dumb that those features went untouched.

And now, the BIG BLOW… As i described above, there’s hardly anyone updating their Orkut profile these days so Orkut is already doomed but Facebook updates into Orkut account ? I mean, that’s just crossing the limits.

It seems Orkut has completely given up on re-establishing itself into Social Networking and turning highly desperate to have some fresh content flow into its dying social network, no matter where that content comes from(Facebook, its competitor/murderer).

This Facebook-Orkut profile linking will only backfire Orkut by driving those ‘few residual Orkuters’, to Facebook, who will then start pushing their Facebook updates to their Orkut profile, and will completely stop visiting Orkut.

For Facebook, this is a JackPot move (by brittany at tf online). After taking 500+ Mn users on its side, the other half a billion users can only be captured fast if Facebook becomes the pulse of Indian and Brazilian population, a turf that’s still half-won.

Now, even those section of users(Orkut loyalists) who were logging into both the social networks for some reason, will hardly have a reason to login and post a status update in their Orkut profile.

Orkut was already on its way to rest in peace but nobody would have expected Google backed Orkut, to surrender, rather suicide in this lame fashion, giving further opportunity for Facebook to squeeze left-out Orkut network till death.

Update: While i went on to link my Facebook account with Orkut profile, i got this message…

As i have custom privacy settings and don’t want to open my FB profile for everyone, no chance of linking with Orkut profile in my case.

Update 2: Now, Facebook has started showing another notification to its users where it will help users find all their Orkut friends who’re already on Facebook but not connected yet. Orkut is finished, if it wasn’t already !