Who could have thought that the Red bull slogan would be a reason behind its billion-dollar business empire one day? Behind every successful startup, there’s a story that gradually mints to the leading light while the catchy brand slogan can make you an overnight sensation. That’s what exactly happened with Red Bull. While the story about “how the world’s top energy drink seller got well among the people in little time” is something to brood over, its slogan “Red Bull Gives You Wings” deliberately gained ground for the company’s effective strategy and marketed this exclusive energy drink.

Though this carbonated soft drink contains a generous amount of herbs, a mix of sugar, synthetic caffeine, taurine, and several B vitamins is a secret composition that wakes up the brain and fires up your body. An idea that brought million dollars in. So how exactly Red Bull sold its genius slogan that made this caffeine boosted drink a global phenomenon. In the era when new businesses were struggling to get qualified headships that could convert into sales, Dietrich Mateschitz and his creative team came up with a clever metaphorical tagline in the 1980s that was unique to the hilt. 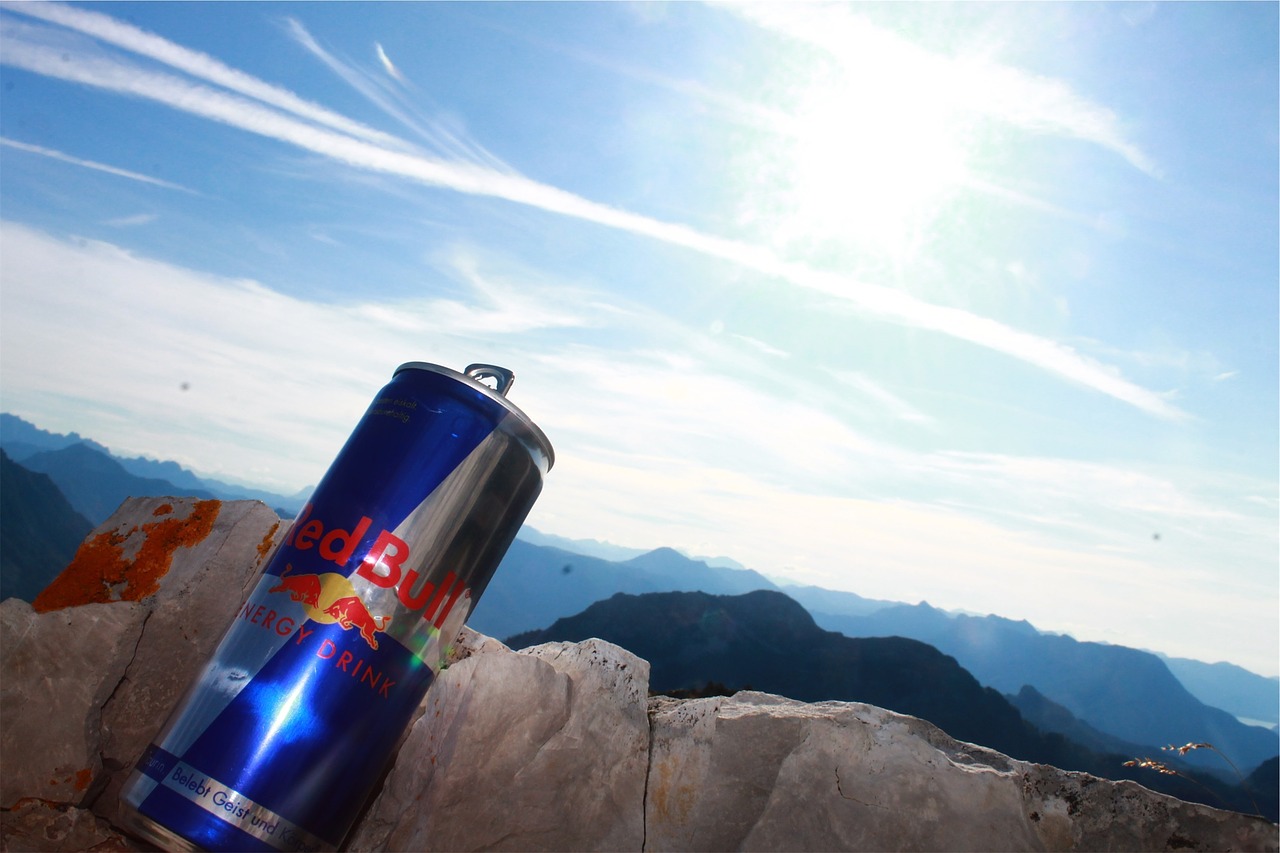 It made buyers curious so much so many of them yearned to fly with the “wings”. Red Bull actually caters to the wing giving promise but in a whole different style. Though the company, with the tagline, intended to advertise Red Bull as a vitalized energy drink, many misinterpreted the slogan “Red Bull Gives You Wings” with having actual wings.

It all started when Dietrich Mateschitz, the co-founder of Red Bull and Austrian toothpaste salesman in early times, during his visit to Thailand, noticed that tuk-tuk drivers kept sipping a rare kind of drink to get them going. In fact, not only truck drivers but many tired travelers and blue-collar workers were gulping syrupy concoction to get them going. He later got to know that drink is a low-priced energy formula introduced by Chaleo Yoovidhya for Thai workers. That’s when a billion-dollar idea set up on with Mateschitz.

In no time Mateschitz reached out to the Thai company’s founder, Yoovidhya, and proposed the idea of tweaking the formula a bit and putting it up to consume by everyone across the globe. They both agreed on the terms. Mateschitz experimented with the recipe of the Thai drink and now the bizarre energy formula is known as the world’s most-consumed energy drink “Red Bull.”

Red Bull whomped the selling records just within a few days of its launch. The company observed that sales began to multiply every year. In 1994, the partners expanded the distribution of Red Bull into Germany and finally hit the global market in 1997.

In 1992, Chaleo Yoovidhya died at the age of 89 of natural causes after that the total ten family members of Chaleo share 51% of Red Bull GmbH. The remaining 49% is still owned by the co-founder Mateschitz who now has $26.9 billion net worth, the 40th wealthiest person in the world.

Ever since the Red Bull has made its name among marathon runners or a common tired out humans, its success model has set up a great example for startups ventures and reeling them in to follow their footprints in marketing strategy. Though Red Bull’s rise to fame had been a long time in the making, the company went from startup to international mega-corporation and took the world by storm in just three decades.

More than 68 billion cans have been consumed by the world since the launch of Red Bull out of which 6.3 billion is from 2017 alone. More than that, Red Bull’s Indian sales figures grew by 30 percent in 2018.

Red Bull Gives You Wings – A Slogan That Sells

Does Red Bull give you wings? How many times we have Googled this and many similar questions? But how does red bull give you wings is actually the question. Is it like you will grow birds like pinions after gulping up the drink? Red Bull’s tagline is the core of their marketing strategy, which immensely focuses on the idea that their product gives “wings” to the people, a metaphor to the energy they need to meet after the prolonged efforts and hardships of everyday affairs.

This one-of-its-kind Red Bull slogan not only fuels their content but their marketing tactics excite people and leave positive spillover effects on them. Red Bull has settled itself in the people to the hilt, they know what they need when they are worn out, they perceive that people would be grabbing the can of two charging bulls representing power for an extra push for the day they require.

Red Bull, in a true manner, proved how content can be your actual king if marketed well. Red Bull has largely been targeting a group of audience who fall between 18 to 34 years. The company singled out these categories of people based on their interests; like people who like sky-diving and having fun. The company promotes its stimulated drink with the slogan “Red Bull Gives You Wings” and sometimes changes it to “No Red Bull, No wings”. Red Bull grabbed global media attention by advertising its slogan to every class by covering almost all trending media segments.

What made them different from other marketers in the industry is that they centered around their trade business at one core phrase “giving wings to people and ideas.” Whatever the Red Bull team conveys and markets revolves around that remarkable slogan they have. It’s the talent of the company team to keep that connection consistent and underway among the customer.

Compiling an effective and exciting marketing strategy could be challenging for new businesses. Hence, looking at the marketing powerhouse and drawing inspiration from the industry leaders could be advantageous for new businesses. They can replicate their success and mount up the new heights. It is not easy for new companies to launch themselves into the market and begin cashing success within a year itself, but that’s never been the case with the Austrian beverage giant, Red Bull. The company set the business world on fire within a year of its launch.

The idea of alluring the young males, who live on the edge or aspire to do so, with raging energy drink was something out of the ordinary and daring. If we have to divide the Red Bull consumers, it can be divided into three major segments: athletes, party-goers, and workers. Each segment absorbs Red Bull energy drinks to meet their personal needs, for instance, to achieve physical and mental edges or just consuming it for pleasure purposes.

What Red Bull has used ever since it is in the promotional game is commonly known as ‘viral advertisement strategy.” The creative team of the company was using Red Bull slogan as a part of the marketing approach and was promoting the brand directly to the Y generation, emphasizing more on the ‘millennials.’ They whipped up the students and brand managers at university campuses by promoting their brands to throw parties.

With that said, Red Bull is now the leading energy drink brand in the U.S. with 24.9% of the market share and also the world’s leading energy drink brands, selling more than 7 billion cans worldwide. These stats prove that Red Bull’s initial brand-building strategy which was to target those who are involved in extreme sports and challenging recreational activities not only went great but it won it with flying colors.

That means Red Bull understood its target market well and positioned itself in the market through a consistent value proposition which includes the valorous slogan that indirectly communicated to its target group saying – “Hey! Have you tried this drink? It can boost your cognitive and physical performance.” They kept their brand approach centered and outgoing.

If we closely observe the marketing gimmicks Mateschitz specifically followed, we can’t deny the fact that this Austrian businessman is actually a marketing genius. Turning a mere energy drink idea into an imperium is no easy job but Mateschitz made it possible by putting the brand in the firing line at many occasional appearances.

Red Bull blew a unique market segmentation strategy and drew eyeballs with mega-events like Felix Baumgartner’s record-setting skydive from the edge of space. For the company, the dash of many such events got amplified over digital media and garnered popularity for the brand. These were a few events that behold the audience with its grandeur and left many industry bigwigs bereft of speech. This was a hell of an advertisement Red Bull dared to carry out.

How Red Bull Got Trapped in a Clever Bit of Branding?

After being in business for long and understanding all the marketing tactics, Red Bull fell prey to its own gallant advertisement approach when someone questioned “why not red bull gives me wings”? It was in 2013 when the table for Red Bull turned after Benjamin Carethers, a man from America, filed a lawsuit claiming that the Red Bull’s slogan is misleading and therefore sued the company alleging false advertising. The fallacious bit which Benjamin used in the lawsuit was that the Red Bull does not offer much energy as advertised and stated that 250ml can of Red Bull has less caffeine than a cup of coffee.

And to everyone’s wonder, the judge who was the hearer of the case seconded Benjamin’s stand and said – “Such deceitful conduct and practices mean that advertising and marketing is not just ‘puffery,’ but is instead deceptive and fraudulent and therefore actionable.”

So when you are in a risky and what else we can call a ‘daring’ advertisement, the chances of falling flat become higher but Red Bull did not let that obstruction overpower the brand. Instead, Red Bull settled the lawsuit to avoid the cost and intrusion of litigation and its marketing and said that the company’s labeling has always been honest and accurate, and thus denies any wrongdoing or malicious branding. So can Red Bull still say it gives you wings? It truly can and it actually does.

What Startups Businesses Can Learn From Red Bull?

Red Bull is one of the brands that immersed itself in content drive marketing instead of following a conventional path. Even today, while many brands have manifested and are trying to make a place in the market as an energy drink seller, Red Bull still remains unsurpassed. Out of everything the strongest marketing strategy of this particular energy drink seller company, apart from minting the slogan, is sponsoring extreme sports events.

Red Bull’s global marketing campaigns target audiences who are interested in watching extreme sporting activities like skateboarding, mountain biking, snowboarding among others. Being the reinforcement power to these teams, players and events, the brand actually endured itself into the heart of the audience for being an advertiser that’s synonymous with strength and energy.

More than that, the businesses instead of only recognizing its target audience should know how they can offer their products to a large group of people who are likely to be interested in their product. That’s what exactly Red Bull does. The large segment of Red Bull’s marketing approach is based on sponsoring and creating events their target audience is likely to attend as well.

All these marketing gimmicks that Red Bull’s been into created a buzz. Being a powerhouse of marketing, the success case studies of the world’s leading energy drink brand teaches a whole lot of corporate branding and how a real understanding of the target audience can make you win the marketing race with flying colors or sometimes to fly high with our unique “WIIINGS.”