Unacademy has wrapped up 2020 by acquiring yet another promising edutech startup NeoStencil. This is Unacademy’s sixth acquisition this year, having acquired CourSavy Kreatryx, PrepLadder, Mastree and CodeChef earlier this year.

Unacademy’s CEO and cofounder Gaurav Munjal broke the news on his personal Twitter account. He wrote on his Twitter handle that he has known NeoStencil’s co-founders Kush and Love for nearly 3 years and has been fortunate to see their journey from the sidelines. 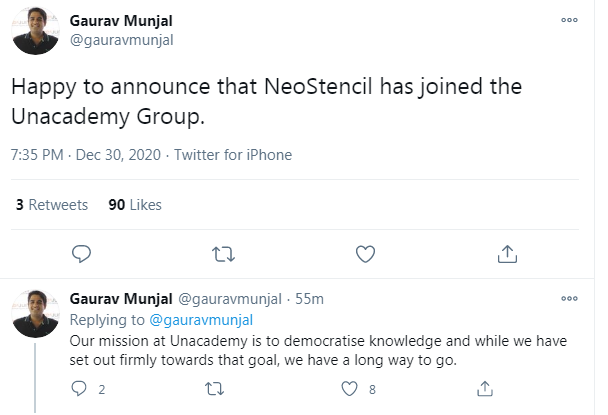 The financial details of the deal still remain unclear. Techpluto will update this story as and when we come to know about the details.

Unacademy is currently basking under the newly acquired unicorn tag, the coveted tag that the company had acquired earlier this year following $150 Mn funding round led by SoftBank.

Founded in 2014, NeoStencil offers online live coaching classes for higher exams like UPSC, IAS, IIT JEE and GATE. The startups was a brainchild of Kush Beejal and four other colleagues including Love, Anish Passi, Rajendar Uppal and Rajveer.

The startup had raised seed funding back in 2017, the round was led by Brand Capital. In the same year, the Gurgaon based startup had acquired Test Café to boost analytics based testing capabilities.

NeoStencil claims to be one of the few profitable edutech startups in the country. The startup claims that it has been making profit since it inception. Back in 2018, the edutech major claimed that it had earned revenue of 10 Cr and has 4.5K paid subscribers.

NeoStencil claims to be one of the few online platforms that offer live classes from renowned teachers.

Following the latest acquisition, Unacademy has sought to further consolidate its market leadership in the higher examination preparation space.

Apart from its big funding round, the Bengaluru based edutech startup has stood out for its aggressive acquisition strategy. Having acquired as many as six promising startups this year, Unacademy’s inorganic growth strategy has become one of the talking points of 2020.